By 2030, increase the Southern Resident killer whale population from 74 individual whales in 2021 to 86 individuals.

Memo to Science Panel with rationale 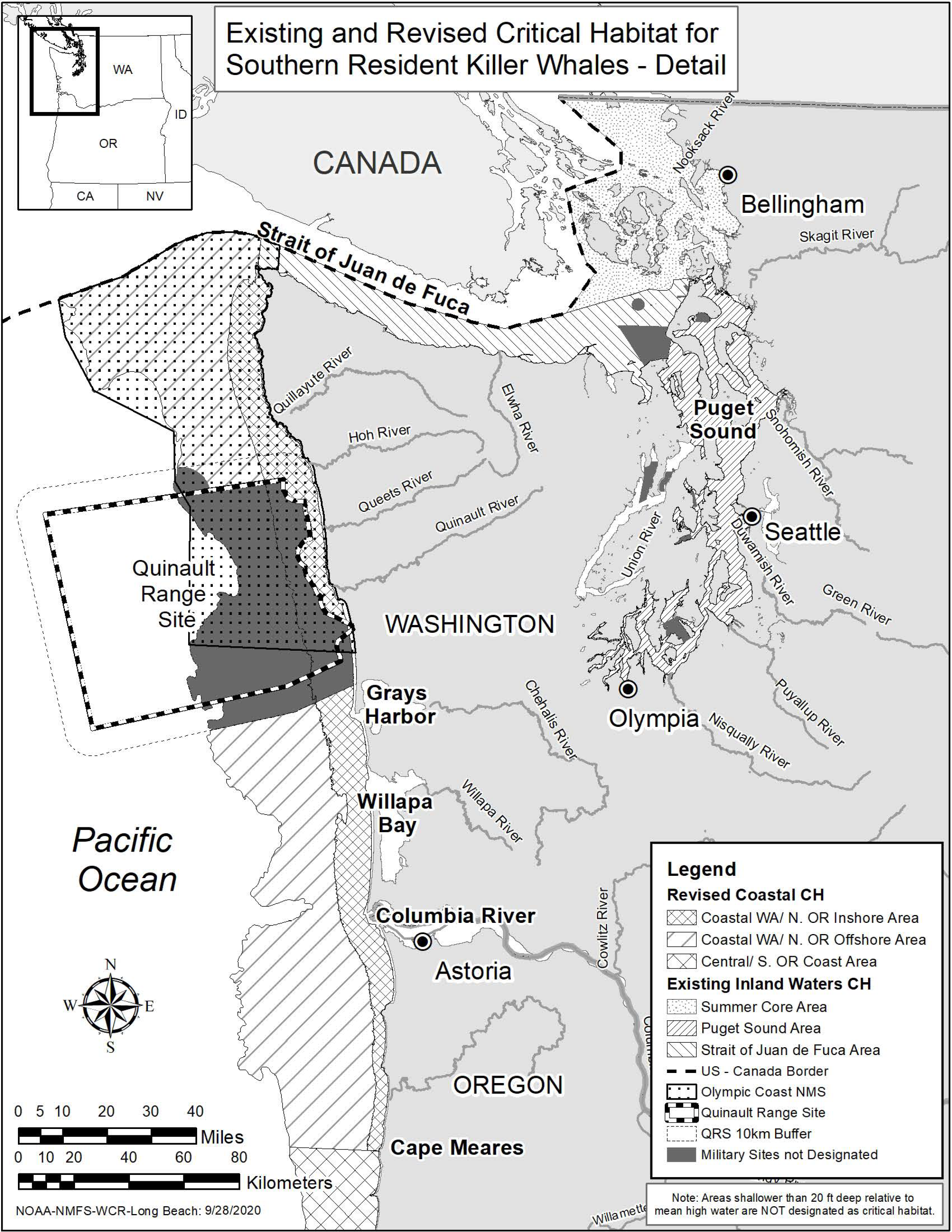 Killer whales, also called orcas, are among Puget Sound’s most distinctive and charismatic inhabitants. They occupy an important niche at the top of the food web. Orcas are very important culturally and economically for the region.

Southern Resident killer whales are a unique population of orcas that ranges in the Salish Sea and along the West Coast of the U.S. and Canada. These whales eat fish and depend heavily on Chinook salmon for food. In the late-1990s, Southern Resident killer whales experienced a dramatic decline. The combination of a precarious food supply and threats from pollution, vessel traffic, and noise continues to jeopardize their survival. As a result, they are federally listed as endangered.

The Southern Resident Killer Whale population in Puget Sound is actually a large extended family, or clan, comprised of three pods: J, K, and L pods. Although they can be seen throughout the year in Puget Sound, they are most often seen during the summer, especially in Haro Strait west of San Juan Island, the Strait of Juan de Fuca, and in the Strait of Georgia near the Fraser River and in the fall in Puget Sound.

Resident orcas were chosen as an indicator because they are top-level predators, spend a portion of the year in Puget Sound to feed and socialize, consume prey species that originate in Puget Sound, and are threatened by some of the pressures on the Sound, such as pollution, vessel traffic, and declining salmon and herring runs. Although a robust orca population is an important recovery goal both at the state and federal levels, there may be limits to how much the orca indicator can tell us about the overall health of Puget Sound. The Southern Resident Killer Whale population migrates in and out of the area, and thus is not entirely dependent on Puget Sound and its resources.

The status of the Southern Resident killer whale population remains fragile. In 2010, the Partnership’s baseline reference, the census reported 86 individuals. Every year since then the population size has been smaller, except in 2011.

The census of the Southern Resident killer whale population, conducted annually by the Center for Whale Research, is an important method by which to assess the status and trends of this endangered population. The entire population is counted with a high degree of certainty using photo-identification techniques. Sighting networks throughout Puget Sound including Orca Network, the Whale Museum, and the Pacific Whale Watch Association, as well as the research community, report sightings and support the census.

The combination of a precarious food supply, exposure to pollution, and disturbance from noise and vessel traffic continues to jeopardize Southern Resident killer whale survival. As a result, they are federally listed as endangered. The health of individual whales is also an important factor which drives reproduction and survival and the small population size puts the Southern Residents at risk from genetic inbreeding.

On March 14, 2018, the governor signed Executive Order 18-02 designating state agencies to take several immediate actions to benefit Southern Residents, and establishing a task force to develop longer-term action recommendations for orca recovery and future sustainability. The governor invited members of the Legislature, the Government of Canada, representatives from tribal, federal, local and other state governments, the private sector and the non-profit sector to participate in the task force. The task force also includes designees from the lead state agencies, Washington Department of Fish and Wildlife and Puget Sound Partnership, and from multiple other state agencies.

From the Orca Task Force November 2018 report: "In addition to these three key threats, climate change and ocean acidification are overarching threats that will exacerbate current stresses on the Southern Residents, primarily through the food web as warmer stream and ocean temperatures, lower summer stream flows, heavier winter rainstorms and sea-level rise impact salmon, forage fish and the entire ecosystem that orcas rely upon."

On November 16, 2018, the task force released its Year One final comprehensive report and recommendations for recovering Southern Residents. The report details potential options to address the major threats to Southern Residents, including prey availability, toxic contaminants and disturbance from noise and vessel traffic.