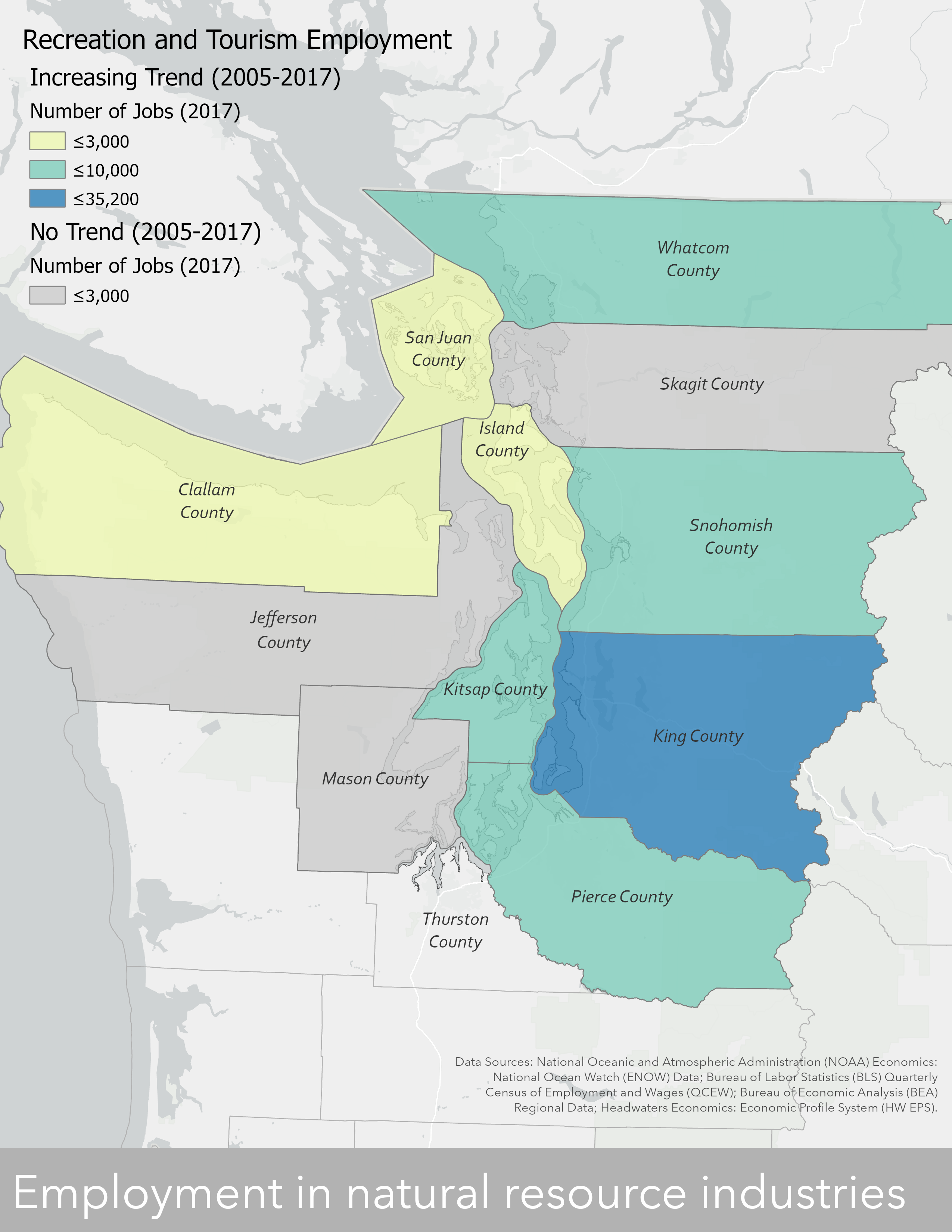 Recreation and tourism employment (2017) and whether there was an 'increasing' or 'no trend' in the number of these jobs between 2005 and 2017, by county across the Puget Sound region. Employment in this sector is reported only for zip codes that are adjacent to the coastal areas. Jefferson and Clallam county data include jobs associated with both the Puget Sound and the Pacific Coast; Thurston County does not include recreation data due to a low connection with coastal activity and recreation.
Description
The employment in natural resource industries indicator tells us how many jobs are supported by natural resource industries in Puget Sound, including timber, fishing, agriculture, recreation and tourism. This information can be used to track changes in the sustainability of employment opportunities in natural resource industries.

This indicator tells us how many jobs are supported by natural resource industries in Puget Sound as well as the wages associated with those jobs. Puget Sound residents have a strong connection to resource-based industries such as fishing, agriculture, aquaculture, timber, and recreation and tourism. While we can measure the economic output for these industries, it is also important to monitor how such output relates to the maintenance of job opportunities and wage levels. Natural resource industries often provide employment to many generations of a family and define a way of life. In addition, employment in these sectors brings individuals in direct contact with the environment, which can foster an ethic of stewardship toward natural resources.

Data are collected and made publicly available through government agencies. Each data source and agency has their own protocols and methodologies for data collection and reporting, and these methodologies may be changed or updated over time. We will report changes as we learn of them, as such changes may bias trends reported here.

There are no targets set for the economic vitality indicators. Economic indicators are being tracked to monitor for potential negative and positive impacts of environmental changes from ecosystem recovery efforts to natural resource industries, while considering variables such as policy and management regulatory changes, technological change, changing consumer preferences and demands, and emerging markets.

This indicator can be used to track changes in the sustainability of employment opportunities and wages in natural resource industries. The data will be compiled from existing sources to provide information on the number of jobs and total wages in individual and combined natural resources-based industries in Puget Sound, by county, by year.

Timber employment data for jobs classified as Forestry and Logging (NAICS 113) and Support Activities for Forestry (NAICS 1153) for the Puget Sound region total are provided by Headwaters Economics Economic Profiling System, derived from the Department of Commerce County Business Patterns data. Timber employment and wages at the county level for those same timber categories are compiled from the Bureau of Labor Statistics. Agricultural employment data for the Puget Sound region total and by county is provided by Headwaters Economics EPA, derived from farm employment data from the Bureau of Economic Analysis (BEA). Agricultural wage data is compiled from the BLS for jobs classified as crop production (NAICS 111).

Fishing and Aquaculture employment and wages are provided by NOAA’s Economics: National Ocean Watch program (ENOW), derived from the BLS Quarterly Census of Employment and Wages (QCEW), and reported by region. Fishing is defined as all finfish and shellfish fishing, while Aquaculture employment includes finfish farming, fish hatcheries, and shellfish farming. ENOW’s Washington region includes all counties in the Puget Sound Management Area, as well as the coastal counties of Greys Harbor, Pacific and Wahkiakum. To accurately reflect management area employment, QCEW employment for the outlying counties was collected and subtracted from the larger Washington region. U.S. Census Bureau non-employer statistics for the fishing industry were also added to the time series to reflect a large amount of self-employed people in the fishing industry. Fishing and Aquaculture employment and wages include harvest activities but does not include value added seafood processing or markets, such as retail and wholesale distribution. Due to the mobility of the fishing fleet, place of work data may only partially capture Puget Sound employment. Because of these two limitations the numbers report in the indicator assessment are probably under estimates of true employment in these two industries. For example, Northern Economics (2013) reports employment in shellfish aquaculture to have been 2,710 jobs in 2010.

Recreation and tourism employment and wages are reported by ENOW and includes boat dealers, eating and drinking places, hotels and lodging, marinas, recreational parks and campsites, scenic water tours, sporting goods, amusement and recreation services, and zoos and aquaria. Employment and wages in this sector is reported only for zip codes that are adjacent to the coastal areas.

Recreation and tourism employment in Jefferson and Clallam counties accounted for 3,396 jobs on average annually from 2005-2016. However, those counties are not included in the indicator results because the indicator is focused on Puget Sound economic activity and we could not accurately remove Pacific coastal tourism and recreation employment from the total. Additionally, employment in Thurston County is not estimated by ENOW because the portion of coastal tourism and recreation that can be attributed to the Puget Sound versus the professional and political activity at the state’s capital is unclear. For these reasons, recreation and tourism estimates above should be considered conservative.

Combined employment in natural resource-driven industries in Puget Sound has trended upward from an estimated 76,001 jobs in 2005 to an estimated 98,820 jobs in 2017, largely impacted by growth in Puget Sound shoreline recreation and tourism. Total wages across these industries have also increased from approximately $1.6 billion ($2017) in 2005 to $2.4 billion ($2017) in 2017.

Removing recreation and tourism employment from combined employment reveals mixed estimates, with peaks in 2008, 2012, and 2017 with lows in 2006, 2009, 2011, and 2014. Employment in industries excluding recreation increased by about 300 people from 2016 to 2017. Wages show similar highs and lows throughout the time series. These trends from 2005 to 2017 are likely driven by a combination of pre- and post-recession effects paired with recent below average Puget Sound fishery yields, and declines in timber in recent years.

Increased aquaculture employment and wages overall could be attributed to a transition to more labor-intensive single oyster production, expansion of Manila clam production, and an increase in labor-intensive geoduck production. Increased aquaculture employment from 2014 to 2015 likely corresponds to lifting a ban on geoduck exports to China. Despite increases in wages and income in this sector, there is continued competition with shellfish imports. While these data only capture growers in the industry, it is important to consider the growing retail and restaurant employment associated with aquaculture production.

Ex vessel value from the Pacific Fisheries Information Network (PacFIN) confirms slack years in commercial fisheries. In addition, droughts and low runs of salmon may have led to loss of jobs in this sector between 2012 and 2015. 2016 suggests a continued decline of employment and wages in this sector.

While employment in timber has continued to be flat, wages showed a noted increase which could be attributed to mechanization in the industry.

Despite a slight decline from 2012-2015, overall employment and wages in agriculture have continued a modest rise from 2005 to 2017. Increases in some counties may be partly driven by growth in small farms that specialize in farm-to-table and organic products.

Increases in employment and wages in tourism and recreation may be attributable to continued consumer demand for farm to table destination dining, cruise ship and tribal casino visitation, accessible shore based recreation (such as kayaking and stand up paddle boarding), and development of tourism infrastructure such as hotels and VRBO accommodations. Some aspects of this increased demand suggest that there is a consumer willingness to pay for the nonmarket attributes of the coastal ecosystem (such as recreation, aesthetics, and culture). The 2015 economic analysis of Washington’s outdoor recreation prepared for the Washington State Recreation and Conservation Office shows relatively high recreation expenditures in areas around the Puget Sound, which would help support employment in the industry.