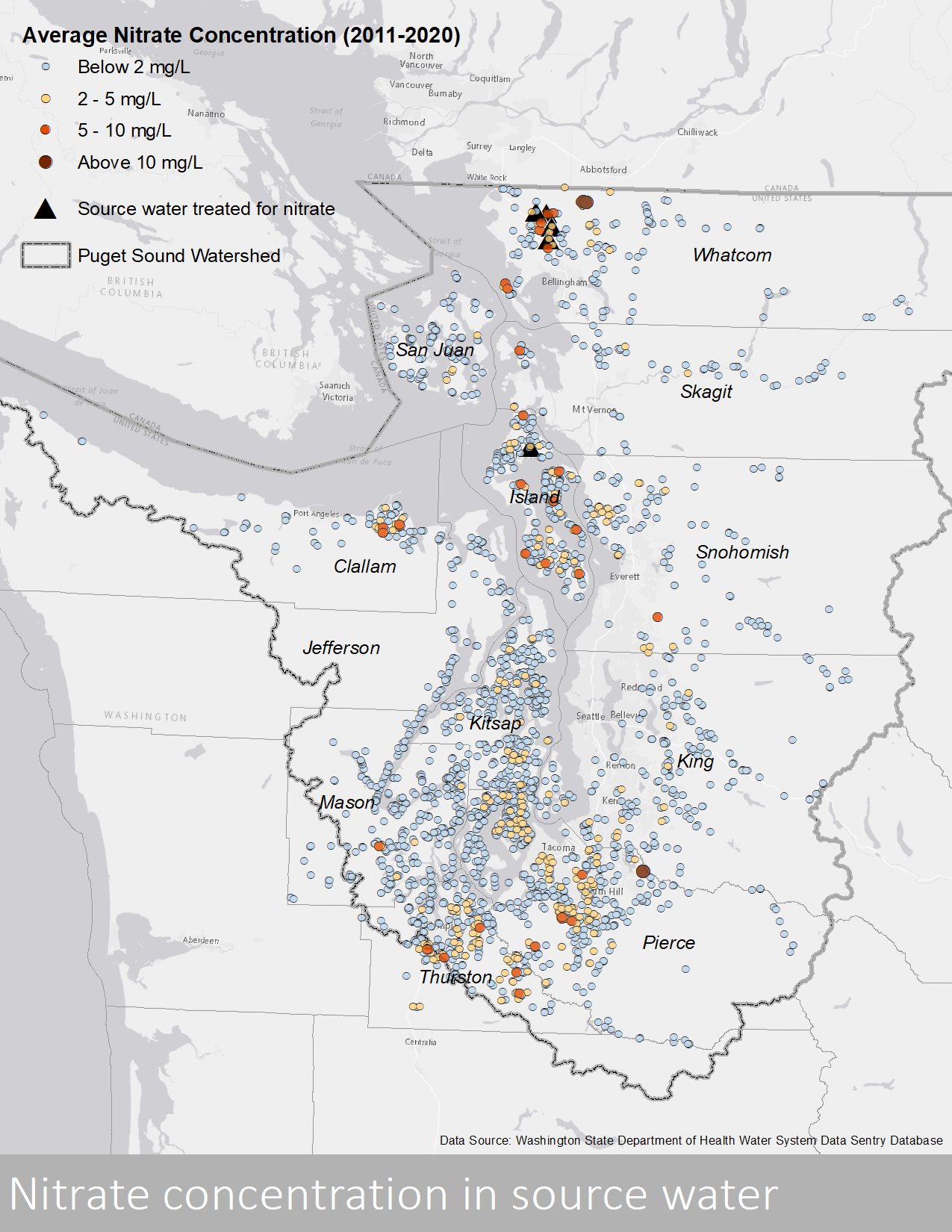 Average annual nitrate concentration in raw groundwater sources to Group A systems across Puget Sound between 2011-2020. Map shows where the average nitrate concentrations were below 2 mg/L, between 2-5 mg/L, between 5-10 mg/L, and above 10 mg/L. The five Group A systems that treat for nitrate are shown as black triangles. Please note that the average concentration is for data available by water source over the 10-year period; see Interpretation of Results below for more information.
Description
This indicator measures the ecosystem’s ability to provide clean drinking water by tracking the concentration of nitrate in groundwater, before water enters public drinking water systems (raw groundwater, pre-treatment). Nitrate occurs naturally in groundwater but is also a widespread chemical that can cause adverse health effects if consumed in too large amount. The detection of elevated concentrations of nitrate may help identify areas that are at greater risk of groundwater contamination.
Vital Sign Indicator Chart 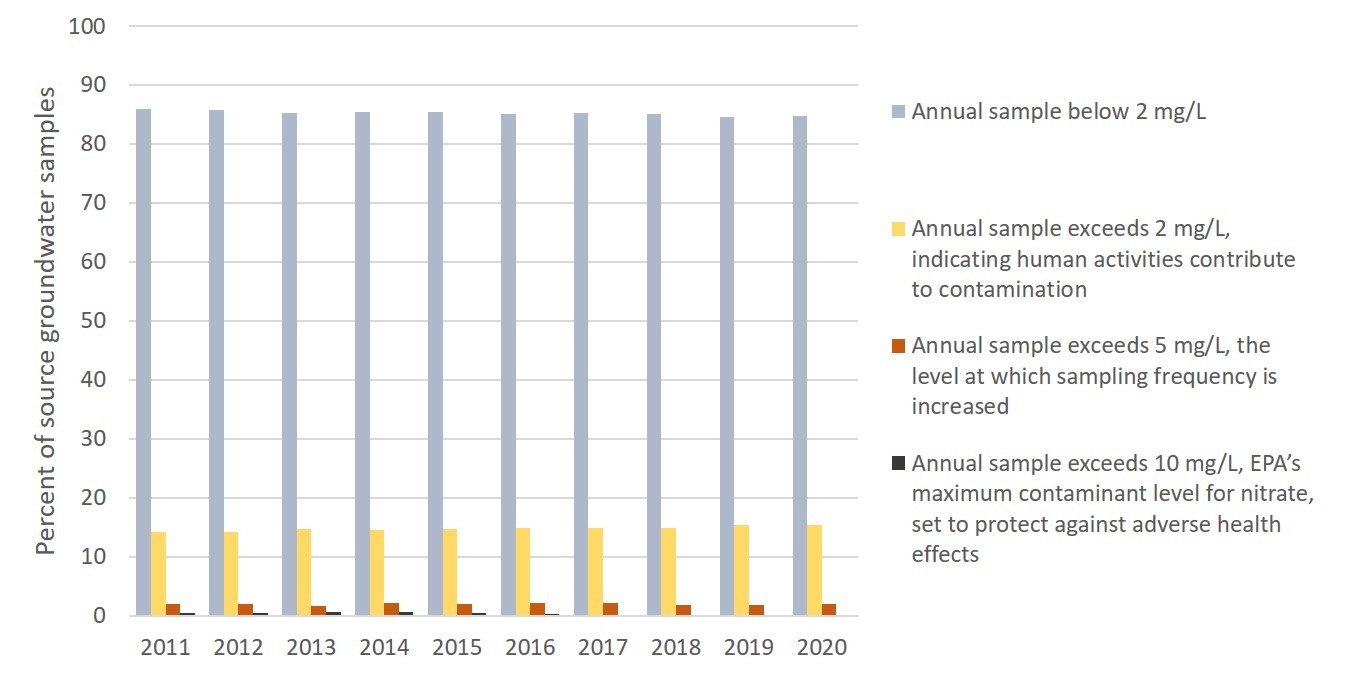 Groundwater provides water to public drinking supplies for over half of the Puget Sound population. A variety of chemicals, including nitrate, can pass through the soil and potentially contaminate groundwater. Nitrate comes from nitrogen, and is found in most inorganic fertilizers, animal manure, and liquid waste discharged from septic tanks. Rain or irrigation water can carry nitrate down through the soil into groundwater where it can persist for years. The detection of elevated concentrations of nitrate may also be an indication of conditions (well depth and surficial geology, for example) that make groundwater more vulnerable to contamination, beyond nitrate, from activities at the land surface (Tesoriero and Voss, 1997).

Most groundwater in Puget Sound is not contaminated by nitrates, however, it is a concern because contaminated drinking water can cause serious health risks, especially in infants. When ingested, nitrate can cause low oxygen levels in the blood which can lead to a potentially fatal condition known as methemoglobinemia or “blue baby” disorder. For this reason, public water systems carefully monitor nitrate levels in source water and treat the water when necessary. Nitrate is not removed by conventional drinking water treatment processes; its removal requires additional, relatively expensive treatment units.

Group A water systems regularly serve 15 or more connections or 25 or more people per day for 60 or more days per year. These systems are regulated by DOH under the Safe Drinking Water Act. State law requires Group A public water systems to sample for many contaminants, including nitrate, on a regular basis. In Washington, the drinking water quality standard for nitrate is 10 mg/L. Group A systems are required to sample each source of water annually for nitrate. If the nitrate concentration in a sample exceeds 5 mg/L, the frequency of sampling is increased to quarterly. If the data show the system is “regularly and consistently” below 8 mg/L in that year of sampling, the system can return to annual sampling. If the nitrate concentration exceeds 10 mg/L, the system must notify customers and treat the water. Nitrate is not removed by conventional drinking water treatment processes; its removal requires additional, costly treatment units. Public water supply systems that test too high for nitrate may also blend water from multiple sources so that the contamination level is below the regulated limits. Blending is strictly regulated by the WDOH and requirements include daily checks and monthly lab analyzed samples for nitrate (WA Nitrate Prioritization Project). Nitrate data from Group A systems are available in the Sentry database.

Group B systems have 3 to 14 service connections and serve less than 25 people per day, or serve 25 or more people per day during fewer than 60 days per year. DOH and local health jurisdictions share administrative responsibilities for these systems and responsibilities vary by county. Depending upon which county it is in, a Group B source may only have one nitrate data point in Sentry. Consequently, annual data is not consistently available for all Group B systems. Therefore, the nitrate concentration in source water indicator focuses on data collected annually by Group A water systems and does not report on nitrate data for Group B systems.

The Sentry database was queried for nitrate analytical results for Group A systems with groundwater sources in watersheds that drain to the Puget Sound. This geographical scope covers 12 counties, however, basins in Clallam and Jefferson County were excluded where they extend beyond the Puget Sound basin. Annual nitrate data is summarized for the Puget Sound region and by county beginning in 2011. For systems taking more than one annual sample (e.g., quarterly samples), the median value for that year was used for analysis.

Group A water systems have 15 or more service connections or serve 25 or more people 60 or more days per year. They are regulated by the state.

Nitrate concentrations in groundwater above 2 mg/L are generally the result of anthropogenic activities (Nolan et al., 1998). Nitrate comes from nitrogen, and is found in most inorganic fertilizers, animal manure, and liquid waste discharged from septic tanks. Rain or irrigation water can carry nitrate down through the soil into groundwater where it can persist for years.

Across Puget Sound, the average concentration of nitrate in source groundwater remained at low levels from 2011 to 2020. Regionally, the annual median concentration ranged from 0.25 to 0.50 mg/L meaning that the majority of groundwater sources to public water systems do not show signs of human caused nitrate pollution.

Widespread and decades-long nitrate contamination, primarily from intensive agricultural practices combined with shallow depth to water and heavy rainfall that carries unused nitrate to the water table, has been well documented in northwestern Whatcom County groundwater (Carey and Cummings, 2012). The Washington Nitrate Priority Project has identified the Sumas-Blaine Aquifer in Whatcom County as a very high priority area based on the severity of nitrate contamination, population, and agricultural land use. Four Group A water systems treat for nitrate contamination and education and outreach is ongoing in this county to address nitrate pollution.

The map at the top of this page shows the location of groundwater sources to Group A systems across Puget Sound. Each system is symbolized by the average (mean) nitrate concentration from samples collected between 2011-2020. Not all water sources reported 10 years of samples; however, most (60%) water sources had at least 8 years of sample results in the Sentry database. Three locations, two in Whatcom County and one in Pierce County, show water sources with average nitrate concentrations above 10 mg/L that are not treated. These water sources have not been sampled since 2016 and are either currently inactive or designated as emergency wells only. Emergency wells are physically disconnected from their water system and are only reconnected when an emergency arises. Under that scenario, the source water is sampled for water quality, including nitrates, prior to reconnection and delivery.

Potential causes for indicator change may include changes in land use or agricultural practices, maintenance of septic systems, location and depth of wells, and regional water management approaches.

Freshwater quality is a priority focus area of work in the 2018-2022 Action Agenda. One of the underlying regional priority approaches for this focus area is to facilitate increased use or performance of best management practices (BMPs) in working/rural lands to reduce the impact of runoff from working lands. BMPs describe methods to manage land (e.g., agriculture, urban, or forest) and activities (e.g., use of fertilizers and manure management facilities) to mitigate pollution of nearby surface and groundwater. More information on this regional priority approach, including a description with example actions and a list of associated near term actions, can be found on the Action Agenda Tracker.