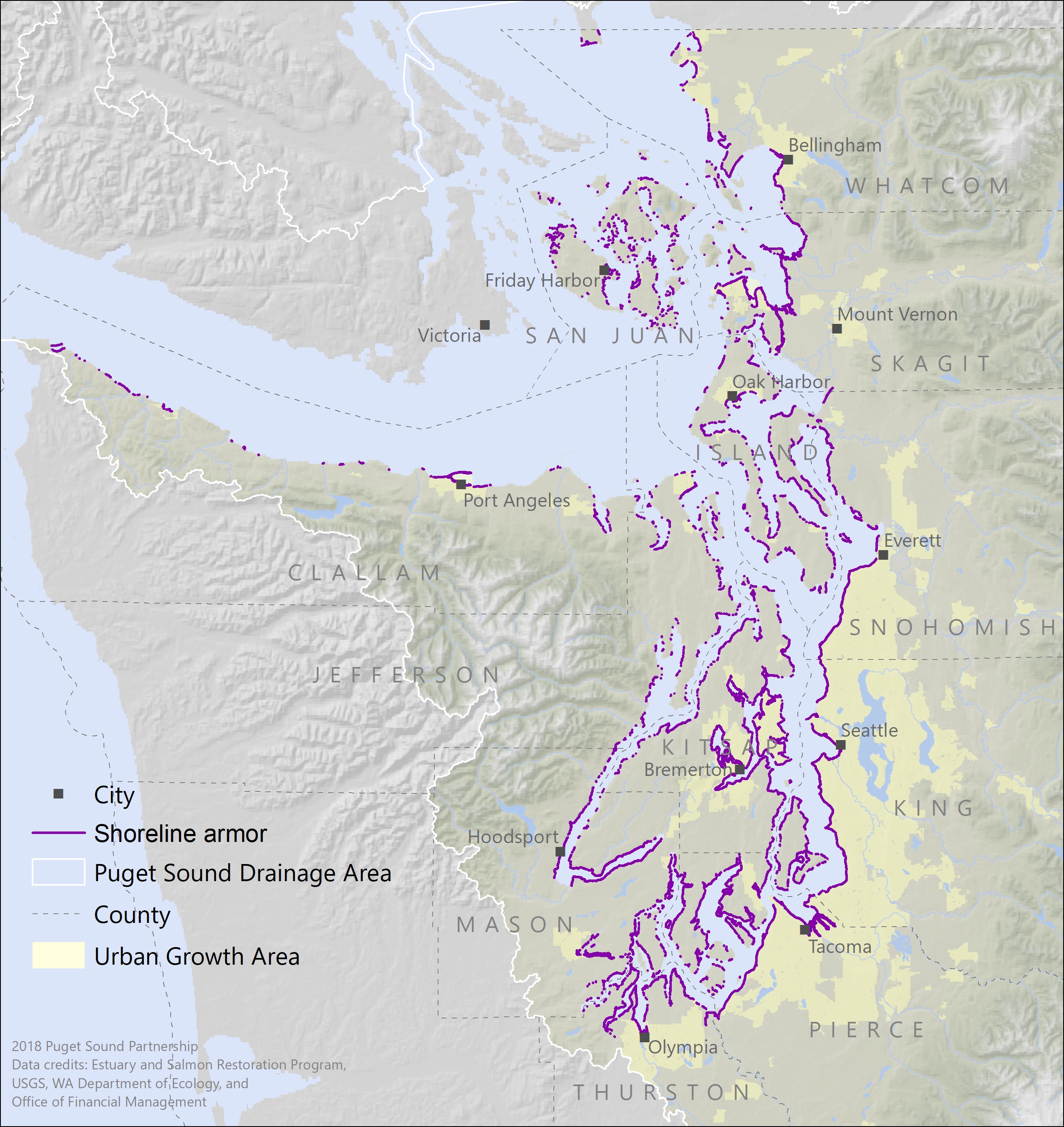 Shoreline armor is the most common type of shoreline modification on Puget Sound. The term includes structures like bulkheads, seawalls, and rip rap. Shoreline armor directly alters geologic processes that supply sediment to build and maintain beaches and spits. Armor also impacts erosion patterns on nearby beaches, alters beach substrate and hydrology, and reduces the availability of large wood.

These physical changes to beaches can diminish the availability and condition of key shoreline habitats. Shoreline armor can also directly impact organisms and ecological processes by burying or displacing upper beach habitat and altering the natural transition between terrestrial and aquatic ecosystems. Impacts of armor differ from one coastal setting to another, but have been demonstrated both on Puget Sound and elsewhere to impact habitat for fish, birds, and invertebrates. On the other hand, removing shoreline armor increases food and shelter for juvenile salmon, forage fish spawning habitat, and provides habitat for invertebrates that many species of birds eat.

Because of these adverse impacts on coastal processes and nearshore habitat and the positive results of removing armor, the goal is to decrease the amount of new shoreline armor that occurs on Puget Sound, while also seeking opportunities to remove armor where feasible. As our understanding of techniques to avoid impacts and consider alternatives related to armor increases, the amount, type and location of new armor is changing too.

As new shoreline armor is being constructed, concurrent efforts are deployed to remove shoreline armor primarily for habitat restoration. Thus, it is the difference between new and removed armor that is of interest to address the 2020 recovery target.

Alterations to the shoreline are regulated primarily by two state laws, the Shoreline Management Act and the Hydraulic Code. Permits issued under the Hydraulic Code for in-water and shoreline construction activities include information on the length of added, replaced or removed armor. Washington Department of Fish and Wildlife has been tracking Hydraulic Project Approvals (HPAs) permits electronically since 2005. Thus, data reported here were compiled from HPAs issued from January 2005 through December 2018 by the Washington Department of Fish & Wildlife. While other data from local studies and shoreline permits under the Shoreline Management Act may have more detailed information at the local level, the HPA database is the most consistent and accessible for assessing all of Puget Sound.

Despite having the most accurate and comprehensive data available to track shoreline armoring, the HPA database has some shortcomings. The HPA database was developed to track permit applications and processing, and was not developed to track shoreline armor data specifically. Data are based on when a HPA permit was obtained for a project and does not indicate when or if a project was ultimately implemented. In addition, the database does not include projects for which a HPA was not required (e.g. some federal projects, projects on tribal lands, pollution remediation projects) or if a project was constructed in compliance with the permitted action or without obtaining permits. Additional information on current data collection and analysis is available in the data methods report associated with the indicator report. Efforts to improve methods to track the shoreline armor indicator are currently underway by the Puget Sound Partnership, WDFW and other collaborators.

HPA projects were categorized by length of shoreline modified as:

Repairs to shoreline armor (minor replacement of existing armor in the same location) are common HPA projects, but are not reported in this analysis because the projects do not alter the footprint, type or length of armor, and therefore, shoreline condition is unchanged. In contrast, projects categorized as replacement shoreline armor involve removal and/or replacement of existing armor that changed the length, types of materials used or altered the alignment relative to the shoreline (i.e. landward or waterward of the existing structure). Replacement permit data are provided for context but are not included in the assessment of indicator progress and status.

In 2018, 84 shoreline armor projects for new, removed or replaced armor were permitted across the 12 Puget Sound counties (Figure 3). Projects within the geographic boundaries of four counties (Island, Kitsap, Mason and Pierce) accounted for 76 percent of the total projects in 2018 for new, removed or replaced armor. These four counties all have relatively long shoreline lengths and collectively account for half of the total shoreline in Puget Sound.

Replacement shoreline armor projects accounted for 65 percent of the total armor projects permitted by HPA in 2018 (Figure 3). Of those projects, 75 percent were replaced in the same location relative to tidal elevation, while 17 percent were replaced landward of the former armor location, uncovering portions of the upper beach. Total shoreline length, shoreforms and length of previously constructed shoreline armor should be taken into account when reviewing new, replaced and removed permits for each year, as these factors vary within the geographic boundaries of each county.

Armor was permitted for removal from 11 Puget Sound counties between 2011 and 2018 (Table 1). Armor removal in Kitsap and Clallam Counties accounted for 43 percent of armor removal by length with 1.9 miles (9978 feet) removed. Removal projects include both large scale shoreline restoration projects and smaller projects that are part of local Shore Friendly programs.

New armor is particularly extensive along residential shorelines for single-family residences, accounting for over two-thirds of the total new shoreline armor length between 2011 and 2018. Government agencies applied for 26 percent of the permitted new armor, often associated with bank protection along road corridors. Commercial/industrial, multi-family residences, and non-profit agencies collectively accounted for 6 percent of the total length of new shoreline armor permits.

In contrast, shoreline armor removal applicants were split between single family residence owners, non-profit and government agencies, along with some commercial/industrial owners. Single family residence applicants comprised 34 percent of the total, although non-profit and government agencies are often working in partnership with residential landowners on armor removal projects. Agricultural applicants did not account for new or removal projects in 2011-2018, although some replacement projects occurred on agricultural lands.

While the rate of new shoreline armor construction permitted between 2011 and 2018 has slowed from previous years, the amount of armor removed increased substantially. A continued positive trend in removals, which has occurred since 2005 albeit at a slower rate, is likely associated with 1) an increased awareness of the impacts to shoreline functions caused by armor, and 2) the efforts by restoration groups to address the problem by seeking potential removal opportunities.

New armor, however, continues to be constructed at an average rate of 0.54 miles per year from 2011 – 2018 (range 0.26-0.93 miles). This apparent contradiction is in part because the situations where new armor is occurring are quite different than those where it is being removed. New armor construction is driven by a perception of risk—sometimes a very real risk—to property and safety. New armor may occur following severe storms and landslides and may be done as an emergency measure, and therefore may not receive the scrutiny normally applied to such projects.

Shorelines are inherently dynamic. Much new armor is likely occurring on properties that were laid out or developed decades ago, without sufficient attention to erosion and flood hazards. The increase in property owners seeking alternative solutions, such as soft shore protection, is worth further investigation to define the motivation to consider alternatives to traditional hard armor practices.

Restoration groups appear to have become increasingly successful at obtaining funding from grant programs for armor removal projects as indicated by both the scale and number of removals in recent years. In addition, public facilities such as state and county parks have become a large component of the armor removal trend. There have also been changes in the material used for armor such that amost half of the new construction projects permitted include elements of soft shore protection (i.e. use of natural materials such as logs, gravels), as opposed to traditional hard armor with large rock, rip rap or concrete. This is also evident in armor replacement projects, with increased use of soft shore protection materials.

Grant funds have also contributed to increased outreach to shoreline property owners, agency staff, contractors, and others who have an interest in the condition of Puget Sound shorelines. Recent studies have provided demographic information on shoreline property owners to facilitate outreach activities that resonate with these owners who have considerable influence on shoreline activities. In addition, most of the local governments on Puget Sound have recently updated Shoreline Master Programs (SMP) in accordance with the new state guidelines. These updates are expected to result in a reduced amount of shoreline armor in the future, however, current data do not yet reflect potential effects of the new SMPs. The combination of increased awareness, landowner assistance, technical guidance and improved regulatory guidance may allow continued improvement in this indicator.

The Puget Sound Nearshore Ecosystem Restoration Project (PSNERP) compiled and reported on changes to shorelines in Puget Sound over the past several decades in a change analysis in 2011. This data was updated with shoreline survey work conducted as part of the Beach Strategies project, resulting in a map of current armoring. Shoreline armor is present on 715 miles (29 percent) of Puget Sound shorelines (see map on the Vital Signs tab of this report).