By 2020, human-related contributions of nitrogen do not result in more than 0.2 mg/L reductions in dissolved oxygen levels anywhere in Puget Sound. 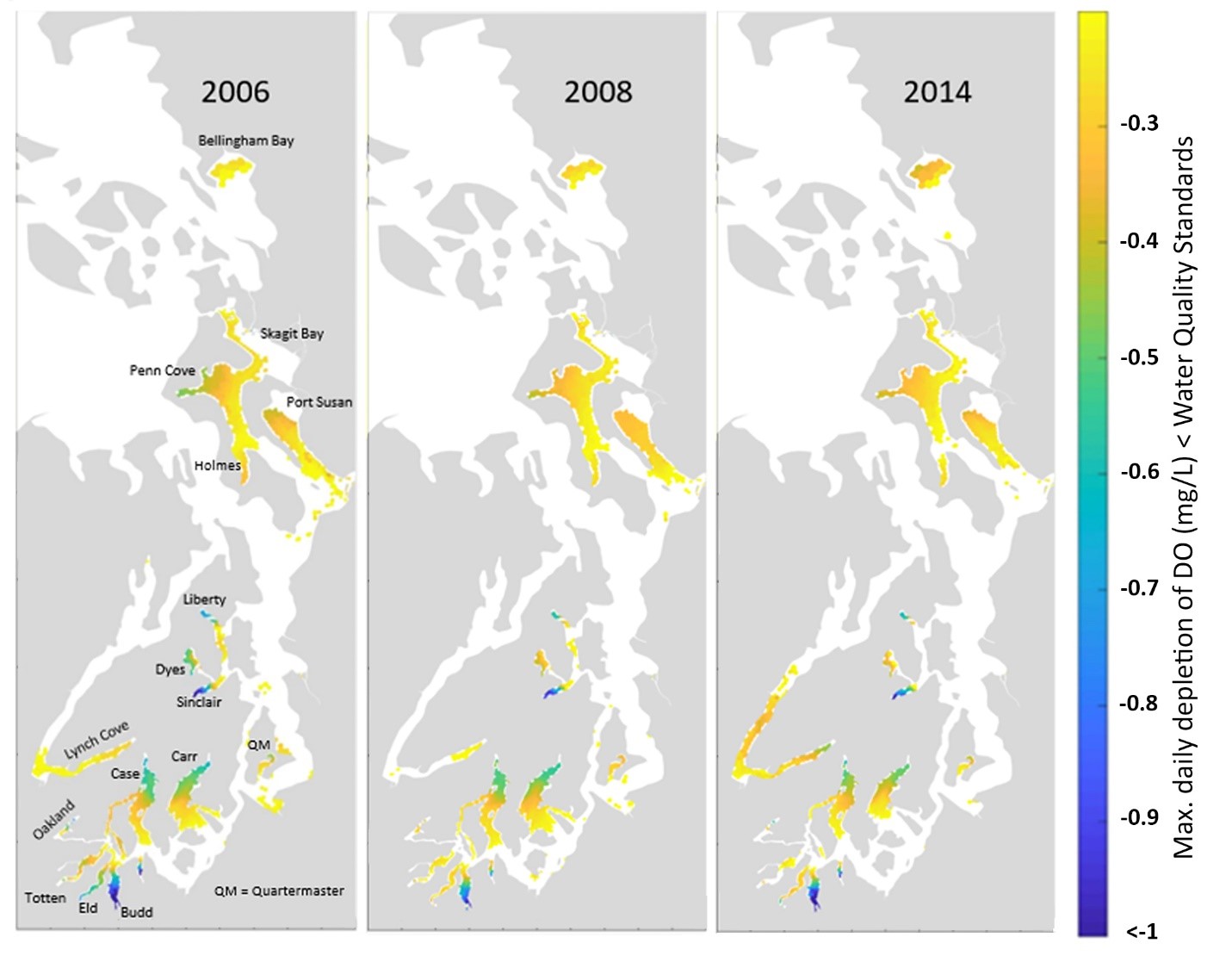 Model results for the spatial distribution of the maximum daily dissolved oxygen (DO) depletion below the water quality standard in 2006, 2008, and 2014. Areas that are green to blue show the highest levels of predicted DO depletion resulting from human-related contributions of nitrogen.

Low dissolved oxygen in marine waters can create significant problems, such as extensive fish kills in extreme conditions. Excessive nitrogen and carbon from human activities can create or exacerbate the conditions that lead to low oxygen in Puget Sound. Too much nitrogen fuels excessive marine algae growth. When the algae dies and decomposes along with excess organic carbon from human sources, oxygen is consumed and drops to levels that cause stress on fish and bottom-dwelling organisms. Processes leading to low oxygen can also create other problems such more acidic waters in some areas.

Much of Puget Sound science work involves the Salish Sea Model. The Pacific Northwest National Laboratory and Ecology worked in collaboration to develop this peer-reviewed, state-of-the-science computer modeling tool that simulates hydrodynamic and water quality processes. The model accounts for both human and natural sources of nutrients to Puget Sound. The sources of nutrients that are not directly from humans represent the expected “natural” loading of nutrients. The Salish Sea Model uses this information to predict a reference condition that is absent of local human nutrient sources in Puget Sound. The indicator focuses on reducing the impact of human sources so that dissolved oxygen does not decrease by more than 0.2 mg/L.

The first phase of modeling to support the Marine Water Quality Implementation Strategy (MWQ IS) and the Puget Sound Nutrient Source Reduction Project (PSNSRP) was completed and published in January 2019. The modeling work established that nutrients from a combination of human sources in the Puget Sound region cause depletions in dissolved oxygen more than the indicator target of 0.2 mg/L. The results of that report are available in an online webmap and the full report is available here: Ahmed et al. 2019. Puget Sound Nutrient Source Reduction Project. Volume 1: Model Updates and Bounding Scenarios. Dept. of Ecoloyg Publication No. 19-03-001.

Watershed sources of nutrients include both point and non-point sources. Rivers and streams deliver nutrients to Puget Sound from the watersheds they drain. Rivers are pathways for nitrogen present in plant fertilizers, livestock manure, and septic systems. The Salish Sea Model includes loads from rivers, streams, and their watersheds, as well as flows from shoreline fringes. From: Ahmed et al. 2019. Puget Sound Nutrient Source Reduction Project. Volume 1: Model Updates and Bounding Scenarios. Dept. of Ecology Publication No. 19-03-001 and Nitrogen in Puget Sound Story Map.

Anthropogenic sources (human sources) of nutrients include both point and non-point sources such as wastewater treatment plants discharging to Puget Sound and human activities within watersheds delivered via rivers. From: Nitrogen in Puget Sound Story Map.

River/streams are freshwater pathways that deliver nutrients and drains watershed areas. "River inputs” and “river inflows” are used interchangeably with “watersheds,” “watershed inputs,” and “watershed inflows” to represent the delivery of flow and nutrient inputs into the Salish Sea Model. In the model, these estimates are for the mouth of each river, stream, or watershed and represent loading at the point at which the freshwater inflow enters the Salish Sea. These estimates include but do not distinguish between various upstream point and nonpoint sources in the watersheds that contribute to the loading at the mouth. From: Ahmed et al. 2019. Puget Sound Nutrient Source Reduction Project. Volume 1: Model Updates and Bounding Scenarios. Dept. of Ecology Publication No. 19-03-001.

0.2 mg/l oxygen depletion rate was adopted as an element of Washington State's marine DO criteria as a small allowable variation from natural oxygen regimes. The 0.2 mg/L limit is based on restricting changes in the DO regime and does not represent a biologically based value but rather, a detectable or measurable change in water quality. From: Washington State’s Marine Dissolved Oxygen Criteria: Application to Nutrients (2018), Washington State Department of Ecology Water Quality Program.

The latest Salish Sea modeling work evaluated three different years: 2006, 2008, and 2014. The goal of this work was not to evaluate trends between each of the years, but rather to understand the variability in hydrodynamic processes and water quality in Puget Sound. Understanding the current range of conditions provides a baseline, from which we can work towards identifying reductions needed from different human sources of nutrients. The three years (2006, 2008, and 2014) were specifically modeled because of distinct differences in the climate and ocean conditions in each year. These years represent different overall residence times relative to a 16-year baseline. The residence time index for 2014 is closer to the baseline, while 2008 is slightly higher and 2006 is much higher than the baseline value. In order to evaluate a trend in the impact of human sources on the decrease in dissolved oxygen levels, different questions need to be asked for the model and many more years of data would need to be modeled. So far, work has focused on "what are the human impacts on dissolved oxygen?" Focusing on the question of "are the human impacts on dissolved oxygen getter better or worse over time?" requires a different modeling project and funding. 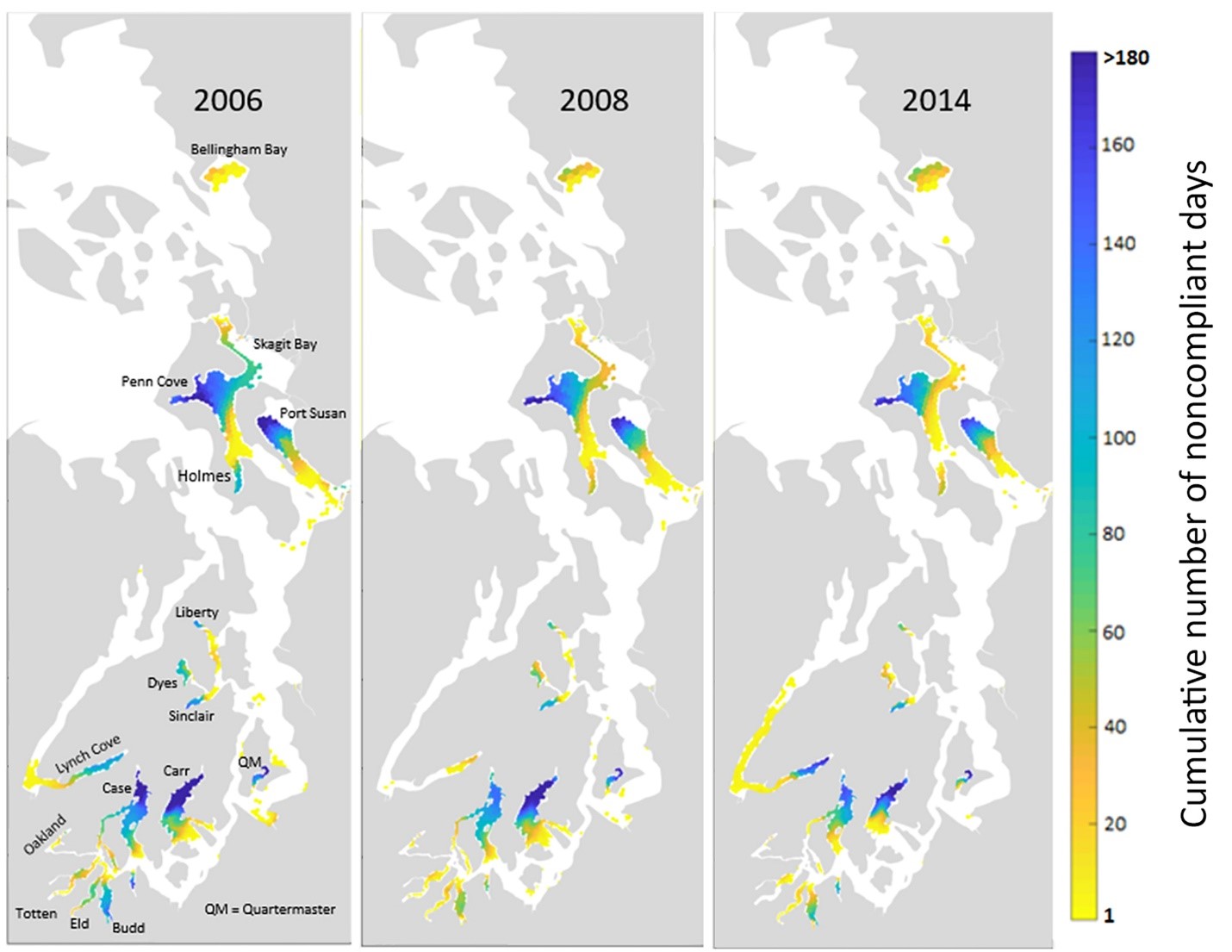 Cumulative number of days when dissolved oxygen did not meet the water quality standard. 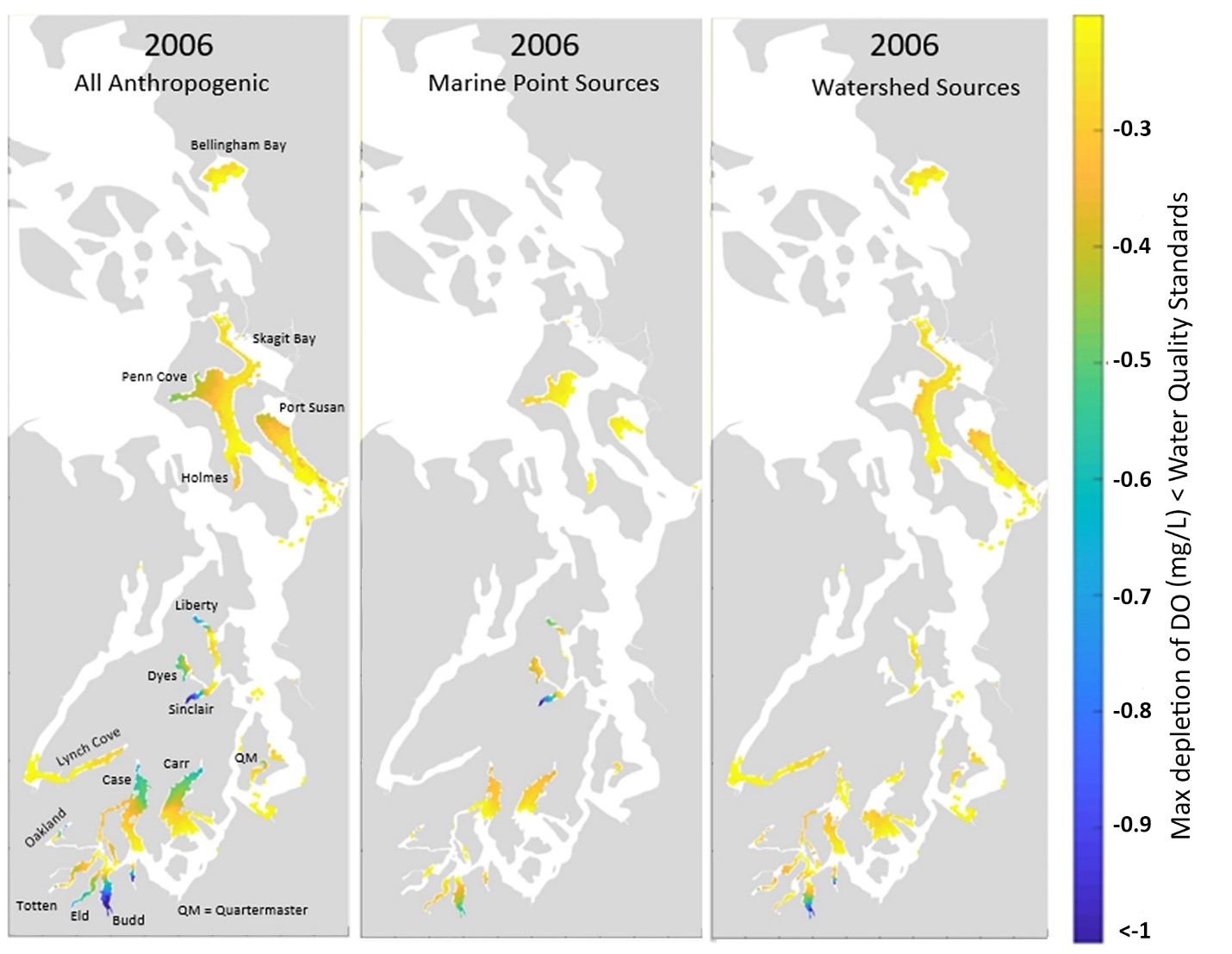 Modeled oxygen depletion in Puget Sound based on human sources.

Dissolved oxygen patterns reflect complex interactions of physics, chemistry, and biology. Concentrations vary tremendously around Puget Sound, near the surface or at the bottom, and during different seasons of the year. Using computer models and observational data, we have learned that much of this variation occurs due to conditions in the Pacific Ocean, climate and seasonal biogeochemical influences, and circulation patterns within Puget Sound.

Human nutrient inputs have increased over what would naturally flow to Puget Sound under forested conditions, and will continue to increase with our population. Understanding the impacts of local human activities on dissolved oxygen in Puget Sound is a long-term endeavor. We continue to improve our knowledge of what drives Puget Sound dissolved oxygen patterns through monitoring programs and modeling analyses in an effort to guide regional investments in nutrient reductions.

Ecology is leading the development of the Marine Water Quality Implementation Strategy (MWQ IS) that will inform actions intended to meet the dissolved oxygen indicator target. Development of the MWQ IS and Ecology’s Puget Sound Nutrient Source Reduction Project (PSNSRP) in parallel ensures that Puget Sound recovery actions are aligned with Ecology’s regulatory actions to reduce point and nonpoint nutrient sources. This is a collaborative effort with communities and Puget Sound stakeholders to address human sources of nutrients. This work uses the latest science and experts from tribes, the regulated community, and state and federal agencies to find the right solutions for regional investments to control nutrients from point and non-point sources.

To reduce the frequency and severity of low dissolved oxygen and associated problems in Puget Sound, the Leadership Council adopted a target intended to minimize local human contributions that worsen low dissolved oxygen in Puget Sound. However, the issue is complicated by the fact that dissolved oxygen naturally exhibits a high degree of variability in marine waters, changing almost continuously with time of day, location, season, tidal cycle, depth, the mixing and movement of different water sources, and many other factors. The fact that there are several large sources of nitrogen entering Puget Sound that are not directly from human sources also needs to be considered. These sources of nitrogen include the ocean (generally the largest overall source), natural watershed yield (from forests, for example), groundwater, and the atmosphere. Determining precisely the degree to which human inputs are responsible for a decline in dissolved oxygen is a complex issue. Addressing the issue requires a combination of good monitoring data, information on the sources of nitrogen, and sophisticated mathematical models like the Salish Sea Model.

No Subcategories for this Progress Measure.