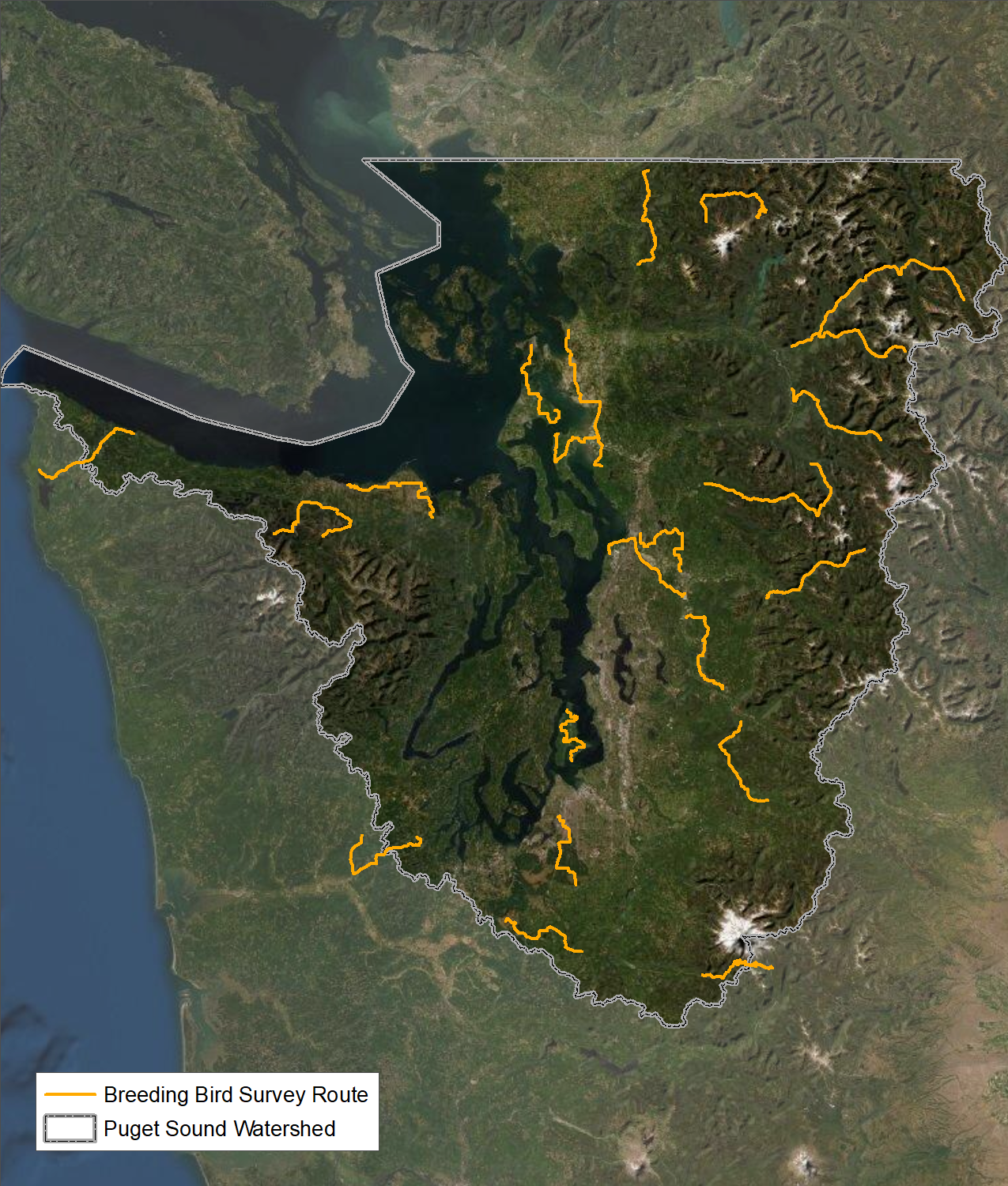 Map of North American Breeding Bird Survey (BBS) routes that occur, or partially occur, within the Puget Sound watershed.
Description
The terrestrial bird population abundance indicator measures the change in forest interior and human-associated terrestrial bird populations that reside most, if not all, of the year in the Puget Sound basin. Population abundance and trends is based on Puget Sound survey data from the North American Breeding Bird Survey.
Vital Sign Indicator Chart
Abundance of terrestrial bird populations
By: Habitat Type
Enlarge Download Chart Data
Composite index of human-associated species (n = 5) and forest interior species (n = 3) relative to the first survey year of 1968. The graph displays how the abundance of the collective group of human-associated and forest interior species deviated from the abundance observed in 1968. A growing population is indicated by values greater than 1.0 and a declining population is indicated by values less than 1.0.

Conifer forests are the predominant native land cover in the Puget Sound region. Forest interior birds select large patches of conifer forests for breeding and are sensitive to the loss or fragmentation of forest patches.

Heppinstall et al. (2008) used an integrated modeling approach to simulate future land cover and predict the effects of future urban development and land cover on avian diversity in the central Puget Sound region of Washington State. Their results suggest that human-associated and forest interior birds are sensitive to landscape composition (e.g., percent forest) and configuration (e.g., small patches associated with residential land use). Their simulations also indicate that the cover of mature forest will continue to decline in central Puget Sound through 2027. The population abundance of interior conifer forest and human-associated birds is likely to be a good indicator of landcover change and forest loss in particular, with interior forest species declining and human-associated species increasing.

Five species are included in the human-associated indicator group: American crow, rock pigeon, house sparrow, house finch, European starling; three species are included in the forest interior indicator group: golden-crowned kinglet, varied thrush, and brown creeper. These species all nest locally and are year-round residents; therefore, they are not influenced by conditions that occur during migration or in southern wintering habitats. The indicator species are also broadly distributed across the Salish Sea watersheds and are reasonably abundant.

Population abundance and trends is based on survey data from the North American Breeding Bird Survey (BBS). The BBS was selected as the primary source of information because the surveys ocur during the nesting season, it is a long-term data set (1968 to present), the survey and analyses protocols are well established, and there was good spatial representation of survey effort in the Puget Sound region. The sample unit for the BBS is a roadside survey route, and each route is surveyed by a single volunteer observer one morning each year in late-spring/early summer (May-June). Each route is composed of 50 stops, at which a three-minute point count is conducted and all birds heard or seen within ~400 m of the point are counted. There are 42 routes in the Salish Sea region with 22 in the United States and 20 in Canada. For the indicator, we only used the survey routes in the United States and that were at least partially in the watersheds that drain into Puget Sound and the Strait of Juan de Fuca. For detailed information on the Survey and their methods, please visit the BBS website.

For statistical analyses we are using annual counts from all survey routes within the U.S. Salish Sea watershed. We use these data in a Bayesian model used in conjunction with Markov Chain Monte Carlo (MCMC) methods following Sauer and Link (2002). Results are presented as an index with 1968 as the baseline year, which was set to a value of 1.0.  As a result, a population that is growing relative to 1968 is indicated by values greater than 1.0 and a declining population is indicated by values less than 1.0.

Forest interior species: nest and forage in conifer forests, are associated with young, mature and old forests in both managed and unmanaged landscapes, avoid forest edges, tend to be associated with larger contiguous blocks of forested habitat and, when found in urbanizing landscapes, are generally associated with high tree density and large forested reserves. We exluded species that migrate away from the region during the non-breeding season and therefore influenced by factors outside the Puget Sound area. We also excluded species that frequently eat human food subsidies (e.g., red-breasted nuthatch) from bird feeders and other sources because population changes caused by changes in their "preferred" habitat (e.g., interior forests) may be offset by human subsidies that increase their abundance locally (e.g., housing developments adjacent to forested habitat).

Human-associated (synanthropic) species: These species are associated with high percent urban land cover, large urban patches, low settlement tree density, and higher percent cover of non-native plant species. They often nest on human structures and frequently eat human food subsidies such as food from feeders or other human food sources. We selected year-round residents because they are more likely to be influenced by local conditions than migrants.

As a group, forest interior species in the Puget Sound region have steadily declined since 1968; however, the trend is not consistent among the three indicator species. Overall decline in the index is driven primarily by the most abundant of the three forest interior species, the golden-crowned kinglet. Golden-crowned kinglets appear to be sensitive to forest fires and other types of disturbance that reduce the cover of mature and older forests. In contrast, brown creeper abundance has increased over time and varied thrush populations are fairly stable. It is not currently known why these species show different trends in population abundance.

Most human-associated species have not declined since 1968, as indicated by the overlap of the credible intervals with zero, or no trend. The one exception is the strong increase in abundance for the house sparrow, a species that is particularly successful in human-dominated landscapes.

Our results suggest long-term declines for some forest interior species in the Puget Sound region. A recent study found that the abundance of North American birds has declined by 3 billion birds, or about 29% of the 1970 abundance. Across all western forests, forest birds have declined by about 30% since 1970s with 64% of the forest species exhibiting declines. The mechanisms responsible for these declines are not well understood but there are strong links to habitat loss. Locally, the rate of forest cover loss to development has declined in recent years. If this decline in habitat loss continues, it will be interesting to see if the rate of forest associated bird populations begins to stabilize.

The Puget Sound Partnership believes in the transparency and accessibility of the data used to address progress measures. These data are provided by contributing partners to the Partnership and are made publicly available through the Puget Sound Info site. These data are available on an "as is" basis and the Partnership is not responsible for any errors, omissions, or inaccuracies. Please acknowledge the monitoring program and data source when using these data and obtain permission from the Vital Sign Indicator Reporter to use these data in a publication.